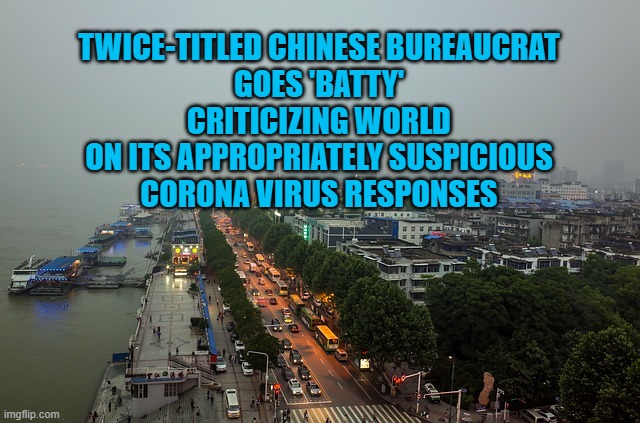 "In the interview filmed...May 13, but broadcast Saturday night (AFP: "Wuhan lab had three...live bat coronaviruses..."), Wang Yanyi [director of the Wuhan Institute of Virology, admitted that]...the centre has 'isolated and obtained some coronaviruses from bats.'" Although, Ms. Wang claims the similarity among the SARS-CoV-2 and the other three corona viruses ["from some bats"] that were being studied "only reaches 79.8 percent," this percentage of similarity is signficant, as Covid-19 has 'morphed' into different variations of itself several times. Even without the possible morphology of the Covid virus, the percentage could be statistically enough, especially if there is a wide margin of positive or negative error, and even more so if the confidence interval of the statistics were found to be relatively limited.

"The Wuhan lab has said it received samples of the then-unknown [corona] virus on December 30, determined the viral genome sequence on January 2 and submitted information on the pathogen to the WHO on January 11." However, in the broadcast interview with state broadcaster CGTN [Chinese version of America's PBS], Ms. Wang seems to contradict herself by saying, "We didn't even know the virus existed," while later asking, "How could it have leaked from our lab when we never had it?"

The Daily Beast apparently does not believe this line of evasively circular logic either. In an article entitled, "China's Trying to Buy the Worlds Silence on COVID-19. Don't Let It.", writer Samantha Vinograd, explains, "China's actions since the outbreak began have contributed to the fatal spread of the virus around the world. Plus, China's efforts to obfuscate the origins of the virus are ongoing." This is very heedy rhetoric from a publication that has been deemed 'liberal' upon more than just a few occassions. Worse yet is Vinograd's indictment that "China is playing hide-and-seek with the truth and using economic instruments to try to hold onto control of the narrative about the virus." Way to go, Samantha! Of course, she also goes into appropriate (but VERY necessary) passing detail about China's inappropriate past in similar other controversial global experiences. But, let's go back to AFP, otherwise known as Agence France-Presse

In a second article by Ludovic Ehret, entitled, China warns US pushing relations to 'brink of new Cold War', we are warned that "China's foreign minister [Wang Yi, again] said Sunday" that "It has come to our attention that some political forces in the US are taking China-US relations hostage and pushing our two countries to the brink of a new Cold War." Oh, no...

"[Mr.] Wang took an apparent swipe at the US struggles to contain the virus, which has now infected more people in the United States than anywhere else [by saying] 'I call on the US to stop wasting time and stop wasting precious lives." According to the article, Mr. Wang also makes a particularly objectionable pun that, "A political virus spreading through the US." What an arrogant, passive-aggressive jerk!

The Chinese bureaucrat also weasled that any investigation into finding out where Covid-19 stating has become problematic, because in "the US, rush to label the virus and politicise its origins, [it is] stigmatising China,"...adding that an investigation must 'oppose any presumption of guilt'." Ah, yeah...sure...right. And to point to a an infusion of 'insult added to injury,' Ehret notes that "China has proposed instead that the 'global response' to COVID-19 should only be assessed when the pandemic is over." Well, gee, China (and especially your Foreign Minister, Mr. Wang Yi, or whoever you are]...thanks so much for trying to hold America and the rest of the affected world as PHILOSOPHICAL HOSTAGES!

But, an article from May 24th was even more indicative of the moderately brilliant communist politician who is PR-slamming (and shaming) the US. In "China tells U.S. to stop wasting time in coronavirus battle", Reuters writer Yew Lun Tian [say, 'Reuters writer' five times fast if you can, and see if you don't mess up...] quoted State Councillor Wang ("who is also China's foreign minister") as intoning that, "Some politicians have ignored the most basic facts and concocted too many lies about China and plotted too many conspiracies...Don't waste precious time any longer, and don't ignore lives." What a little...you-know-what! Foreign Minister, State Councillor, public relations practitioner, government shill or whatever you are, the whole world suspects what went on in the Wuhan Lab. Obvuscation and propaganda-concealed insults will not work. Fact-finding is in-progress, and we WILL get to the bottom of this!