COULD THE VIRUS
OF THE PAST COUPLE OF MONTHS
POSSIBLY HAVE BEEN COVID-19? 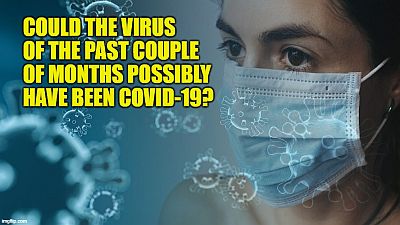 Several people have asked at RightWingMedia.net and Conservative Country News if we thought the seemingly absurd recent claim by a few fellow media entities that Covid-19 (or some version thereof) had somehow actually been the virus that had been floating around the U.S. during the past few months.

This latest medical conspiracy theory is fascinating conjecture, but unless someone can come up with a reliable sample of that virus from back then, there would be no way to even begin to substantiate what could be certainly drummed up into a rage of almost paranoid anger against China right now.

If that sounds almost like an amusingly frustrating Dr. Who paradox to you, you're not alone. IF someone could come up with a reliable sample of that virus from back then AND compare it to genetic material from the CURRENT version of COVID-19 (AND with an 80-90+ percentage of similar or equal genetic material and related sequences), THEN China could become suspect.

The idea would then be that either China somehow allowed the virus to be let loose on North America during the past few months (even earlier than those deriding China for not fessing up sooner for the CURRENT strain of COVID-19) without telling us, or that the occurrence of COVID-19 happened right under the noses of the Chinese before the consideration of telling the rest of the world even became a consideration. Of course, the virus that hit many in the U.S. could have been entirely SEPARATE and COINCIDENTAL. But, this brings up another interesting hypothetical issue.

What if the virus-of-the-relative-past WAS the SAME as the current COVID-19? It would not be any stretch of the imagination to assign blame on China. But to do so would require the legalistic assignment of SPECIFIC blame, aka damage alleged for MEASURABLE BUSINESS/ECONOMIC/SOCIAL IMPACTS resulting from the interaction with and/or the IMPACTS resulting from the EFFECTS of Covid-19.

As of this writing, I am not aware of (but would like to know about) any international law which is capable of assigning blame to another country that does not report a wide-spread disease outbreak in a timely manner.

From a conservative point of view, let's hope that the World Health Organization (as well as affected countries, such as the United States) will have the backbone and foresight to develop the most suitable sanctions accordingly against China.