Twitter Locked Down Account of The Federalilst
for "Promoting Coronavirus Parties,” in an article, and
The New York Times might have taken the original article a bit...differently 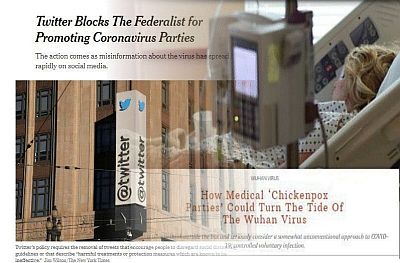 Twitter Locked Down Account of The Federalilst for "Promoting Coronavirus Parties". and it seems The New York Times ALSO might not entirely understand the article as well when it put for its own reportage.

Here's an excerpt from The New York Times article by Michael Levenson: "Twitter on Wednesday temporarily locked the account of a conservative website after it promoted an article suggesting that the medical community should consider intentionally infecting people with the coronavirus at “chickenpox parties” to help slow the spread of the virus.

To be fair, the original article from The Federalist, titled “How Medical ‘Chickenpox Parties’ Could Turn The Tide Of The Wuhan Virus,” by Douglas Perednia, “a physician in Portland, Oregon...[and]...the author of "Overhauling America’s Healthcare Machine," argued that a 'controlled voluntary infection' program could allow young people to return to work after contracting and recovering from the virus."

Although it might be inferred otherwise, the article in The Federalist does not overtly encourage its readers to 'go to a party and purposely get infected' with the Covid-19. However, the ironically, the title of the article COULD inadvertently plant that inferential seed into the mind of a reader. In fact, moving forward, whomever wrote the title/headline of The Federalist article might want to more carefully consider unintended impacts stemming from unanticipated reader interpretations of article titles. As suitably sensationalistic as it might be, using the term, “Chickenpox parties,” in an article is likely to take away readers' subjunctive mindset even before they are able to read the logically penned medical methodology.

And to continue to being fair (especially regarding the 'logically penned medical methodology,' there is an excerpt from the actual article in The Federalist, along with a few of our observations and suggestions: "Otherwise-healthy young people who have not yet contracted COVID-19 can enroll in the CVI program at a designated 'safe infection' site."

“After being medically screened, participants are actively exposed to the mildest form of COVID-19 virus available. They are then housed under quarantine in an appropriate CVI facility. The facility could be as small as one’s home or as large as a hotel or cruise ship. (Given the recent example of spring break 2020 for college students in Florida, one could imagine CVI even becoming a social activity.)”

OBSERVATION/SUGGESTION: The reference to college spring break in Florida might conjure up such FRIVOLOUS images, such as Brady Sluder, who is having to apologize and live down having said in the media, “If I get corona, I get corona.” Best practice might have been The Federalist NOT to go down that path of analogy.

“All participants are then regularly screened for the presence of an active COVID-19 infection and medically monitored during their illness. Patients who experience serious medical complications would be evacuated to an acute care facility. Once a patient reliably tests negative for an active infection, he or she receives a certified clean bill of immunity (CCBI) and is allowed to re-enter the community.”

OBSERVATION/SUGGESTION: It is not clear from The Federalist article, but the question has to be asked from the construction of the sentences in that paragraph is if the “acute care facility” is isolated from the rest of “the community” or not. Seemingly minor point, but a clarification might have been useful.

“A critical component of this program is widespread testing of the general population to determine exactly who has and has not already become immune to coronavirus. Those who have previously been infected and developed immunity would also be given a certified clean bill of immunity."

OBSERVATION/SUGGESTION: Practicality is an accidental issue here. The White House has thusfar not been fully able to motivate everyone towards the desirable practice of “social distancing” enough to limit people's likely exposure to Covid-19. Plus, the problems with getting enough testing kits, even for those who may have the disease, is still logistically and financially problematic.

But with all that apparent criticism against The Federalist, the kicker is that, like most of the leading mass media, The New York Times has no problem overly-sensationalizing news – especially when whatever that is being put forth by them is 'too conservative' when compared to seeming worldview of that esteemed publication and its staff.

In reading through the article from The Federalist, the premise of this admittedly controversial concept is being very cleverly amplified and picked apart by The New York Times. Another expert of the NYT article shows possible near journalistic deviousness of-sorts: "The company’s policy requires the removal of tweets that encourage people to disregard social distancing guidelines or that describe “harmful treatments or protection measures which are known to be ineffective...The action comes as misinformation about the virus has spread rapidly on social media, frustrating companies like Facebook, Google and Twitter that have worked aggressively to stop the promotion of “miracle cures” and other false information."

In those two paragraphs, the New York Times seems to be using the propaganda technique of 'guilt by association' to allow readers to believe that The Federalist article is being promoted by "tweets that encourage people to disregard social distancing guidelines” or that describe “harmful treatments or protection measures which are known to be ineffective'.”

To be fair, The New York Times article is very good at what it does. In fact, not only should the writer, Michael Levenson (respected writer for The Boston Globe, MSN, O Globo, MSN Canada, The New York Times, The Independent, Chicago Tribune, U.S. News & World Report, Sydney Morning Herald, The Huffington Post, The Atlantic and more), be commended for his journalistic expertise and skill, but his editors should probably also be commended, too, for not allowing direct accusations to be made against The Federalist which could be messy and create more problems than they would have been ultimately worth.

Ultimately, it is more than curious that (as Levenson reports), Dr. Perednia's editors did not answer attempt(s) of Levenson for comment. Additionally, Levenson nearly redeems most of any remaining concerns about his objectivity towards conservative causes by stating that, “...some doctors said it might be worth exploring strategies other than social distancing to combat the spread of the pandemic.” Unfortunately, with a few major observational concerns and one heck of a likely potential titular faux paus in his article, Dr. Douglas Perednia might want to take a lesson or two from Michael Levenson about in-depth journalistic writing, and how NOT to set Twitter off. While some in the depths of conservatism might want to attend a 'Corona party,' thinking it to be the 'conservative thing to do,' it is probalby not, at least without being fully fleshed out -- and being medically incontrovertible in its methodology). However, the reporting about trends of such potential gravity should ideally also be tempered with the utmost in caution as well regarding the interpretation of what might be thought of what is written.


Quotes used in the above article are deemed 'fair use,' in that they are part of scholarly analysis of news and its presentation on a current event from two different viewpoints. As a courtesy to either of the publications listed, RightWingMedia.net will accept a request from either publication for the deletion of this article upon such being received.