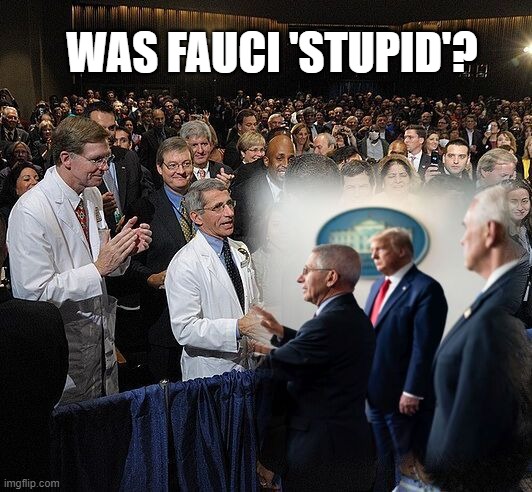 Contrary to Popular Belief, President Trump Not the Corona Virus Villain...It Seems to be a DOCTOR

On February 17, 2020, Jayne O'Donnell wrote in USA Today an article stating: “Top disease official: Risk of coronavirus in USA is 'minuscule'; skip mask and wash hands.” In that article (https://www.usatoday.com/story/news/health/2020/02/17/nih-disease-official-anthony-fauci-risk-of-coronavirus-in-u-s-is-minuscule-skip-mask-and-wash-hands/4787209002/), Dr. Anthony Fauci, one of the prominent leads of the White House's effort at combatting Covid-19 was quoted as having told President Trump then that risk of the disease becoming a threat were “minuscule.”

For anyone who has not grown up around big words, minuscule, means really small. And a trusted public health authority and respected scientist telling the President of the United States that what was becoming a pandemic is of little threat to your country, smacks somewhere between stupidity and ignorance of an increasingly most likely truth.

After several of his staff have been diagnosed with the virus, the leader of the free world, President Donald Trump, is now dramatically in harms way! But, it gets worse – especially for Dr. Anthony Fauci.

On April 27, 2020, Cheryl K. Chumley suggested in The Washington Times that “Anthony Fauci should explain '$3.7 million to the Wuhan laboratory'” (https://www.washingtontimes.com/news/2020/apr/27/anthony-fauci-should-explain-37-million-wuhan-labo/). [Some figures claim the amount is over TWICE that amount.] Chumley, specifically alleges that Fauci, who was the director of the National Institutes of Health at the time, has "financial ties" to the agreement with the Level-Four biocontainment facility in Wuhan, China, known and WIV. Perhaps Fauci might also need to explain why all reasonably foreseable catastrophic contingencies were apparently not covered entirely, and why a previously hostile (and obstinately communistic) foreign country was allowed to become the staging ground for the study of such important and dangerous viruses.

And as of late, President Trump says, “Someone was stupid,” he speaks in an Associated Press video about the possibilities that COULD have happened at WIV (“'Somebody was stupid': Trump pushes Wuhan coronavirus lab claim – video,” The Guardian – https://www.theguardian.com/us-news/video/2020/may/08/somebody-was-stupid-trump-continues-to-push-wuhan-coronavirus-lab-claim-video). However, the President's hesitation makes you wonder if the 'stupidity' in-question might have been that of Anthony Fauci.

According to a May 2, 2020 report by Benjamin Siegal of ABC News (“Fauci to testify before Senate after White House blocked him from appearing before Congress” – https://abcnews.go.com/Politics/white-house-blocks-dr-anthony-fauci-testifying-congress/story?id=70464358), the chairs of the House Appropriations Committee, which is deciding on future contined pandemic relief funding, believe that “the American people and Congress 'deserve a clear-eyed view of the path forward for responding to the COVID-19 pandemic'."

Frankly, the American people probably also deserve a 'clear-eyed view”as why Dr. Anthony Fauci is being alleged to have lied to a President, and aided funding for a questionable laboratory to study such a deadly disease in the first place. Perhaps this is one 'conspiracy' he will have trouble denying so quickly.